SCSI is featured in the national Hispanic television network, Univision, to highlight the job opportunities and job markets available for interpreters.

Director of Education and Founder is appointed as Advisor by the State Personnel Board for the Medical and Administrative Hearings State Interpreter Examinations.

Receives commendation from California Senator Joseph Dunn of the 34th District in recognition for the school's contribution to the interpreting field.

Receives commendation from Mayor Betty Putnam, of the City of Santa Fe Springs, for being the school with the highest pass rate of certified interpreters in the state of California.

Interviewed by FOX (channel 26 in Orange County) to discuss the school's programs and opportunities available to Hispanics in the field of interpretation.

Receives commendation from Mayor Sharon Martinez of the City of Monterey Park, recognizing the critical importance of skilled interpretation, especially in the legal and medical fields.

Director of Education and Founder is appointed by Chief Justice Ronald M. George of the Supreme Court of California, as a member of the Court Interpreters Advisory Panel of the Judicial Council of California. He held this position for 4 consecutive terms.

Interviewed by Univision, the largest national Hispanic television network in the U.S. for the segment,           "La Interpretacion una Mina de Oro", which underscores the demand for Spanish language interpreters and the constitutional right of limited English proficient individuals to require an interpreter.

Our school was awarded a contract by the City of New York, Department of Education to provide a unique and tailored online language assessment and training program for their bilingual staff.

The City of New York was the recipient of the 2010 Bright Ideas Award issued by Harvard University, through its ASH Center for Democratic Governance and Innovation. This is the most important recognition of our programs thus far.

Our school was featured and identified by Multilingual Computing Inc, the leading source of online information for the language industry; as one of the most succesful educational entities for legal interpreters.

Celebrating our 20th Anniversary as the leading Spanish language interpreter school for both on-site and on-line interpreter training. 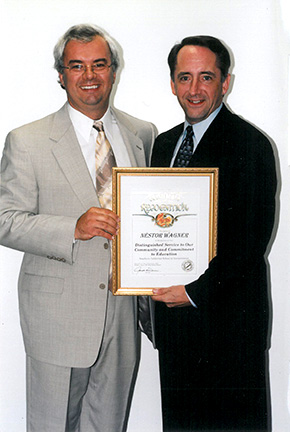